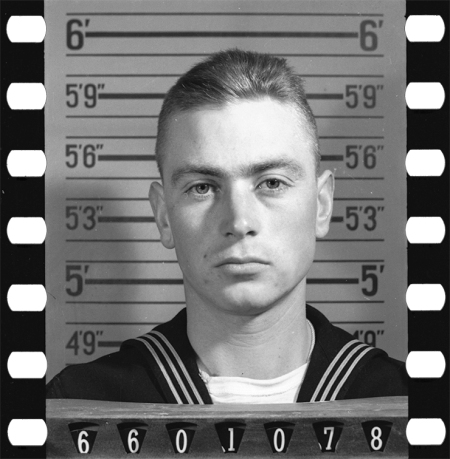 Walter Dodd was born in Anaconda, Montana, in 1918. He was the oldest son of ranchers Albert and Myrtle Dodd; the family relocated to Missoula when Walter was an infant, and then moved to Granite Falls, Idaho. In 1931, they returned to Missoula and established their family homestead on Butler Creek. The “3-D Ranch” would be Walter’s home and livelihood for most of his life.

Walter attended Grant Creek grade school and graduated from Missoula County High in 1936. He was a bright student but college was not in the cards; for the next five years, Walter worked the family ranch. Then the Japanese attacked Pearl Harbor, and his life changed forever.

On 29 December 1941, Walter Dodd went down to Missoula to the Navy recruiting station. He filled out the enlistment application, was poked and prodded by doctors, and provided four references for his good character. Much to his excitement, he was accepted as an apprentice seaman on 1 January, 1942. Eleven days later, he was learning to field strip a Lewis machine gun in San Diego.

After completing his basic training, Dodd was earmarked for hospital corpsman’s school. He turned out to be a natural medic, earning high marks in his studies and graduating 37th in his class of 160 aspiring corpsmen. As a hospital apprentice, Dodd took additional training at the Puget Sound Navy Yard and quickly advanced to the rating of Pharmacist’s Mate Second Class.

A hospital corpsman could serve in any capacity from a Stateside hospital to a fleet carrier. A few were chosen to attend Medical Field Service School – they would be attached to Marine Corps units headed for the Pacific. Dodd was one of those chosen for the Fleet Marine Force in March of 1943; he once again excelled at his training and at the end of the eight week course was ranked twelfth of 57 in his class. After a brief spell with the Fourth Medical Battalion at Camp Elliott, Dodd was assigned to Charlie Company, First Battalion, 24th Marines as a “medical field technician” – or platoon corpsman. 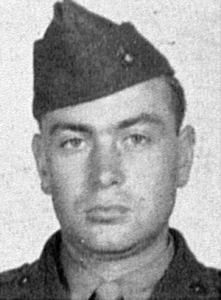 Dodd spent the balance of the year training at Camp Pendleton; he sailed for the Pacific in January, 1944 and saw his first combat during the invasion of Roi-Namur three weeks later. Although Charlie Company took comparatively few casualties in the operation, Dodd’s abilities were noted by his officers. He was examined and found qualified for promotion to Pharmacist’s Mate First Class in March of 1944, earning high marks for proficiency and a perfect score for conduct.

Dodd would more than earn his promotion in the coming campaign for the Marianas. After surviving the brutal three week battle of Saipan, the Montana corpsman made the combat landing on Tinian on 24 July, 1944. That night, his battalion was hit by a massive banzai charge – the largest they would experience in their lives. The attack was focused on Able Company, and soon all of their corpsmen were dead or wounded. Already exhausted from a full day of treating wounded men, Dodd nevertheless headed towards the sound of the firing. He ran to an amphibious tractor sitting idly nearby, but the driver was deaf to Dodd’s pleas to take the armored vehicle on a rescue mission. The frustrated corpsman then spotted a jeep ambulance whose driver lay dying with a fatal wound. Ignoring this obvious indication of danger, Dodd commandeered the jeep and drove hell-for-leather through the chaos of battle, screeching to a halt at Able Company’s position. He helped the Marines load the most seriously wounded into the ambulance, then raced the jeep back to the battalion’s aid station. Dodd’s actions so impressed his officers that they recommended him for the Silver Star; however, Dodd insisted that he had “just done his job” and refused the decoration. A compromise was reached, and he later received the Bronze Star instead. (1)

Dodd’s devotion to his task was based more on professionalism or sense of duty. Part of his job as a senior pharmacist’s mate was to keep track of those killed and wounded from his company. Many of these men were his close friends; he had personally saved the lives of some, and others were beyond his help. He shared the universal motivation of Navy corpsmen throughout the service: keep that list from growing longer. He doubtless instilled this belief in the junior corpsmen who joined his company. The assistant surgeon, Lieutenant (j.g.) Richards P. Lyon, was impressed by how veteran corpsmen “knew their business and rules of survival.”

Iwo Jima would be Walter Dodd’s greatest challenge, and he rose to it readily. “Tireless and conscientious,” in the words of an officer, Dodd always seemed to be where the fighting was fiercest, and on multiple occasions was seen leading stretcher parties to recover wounded Marines. In a particularly spectacular performance on 4 March 1945, Dodd’s stretcher party reached a Marine trapped in front of their lines, and got the man to safety. He would receive a second Bronze Star citation for this act of heroism. (2)

Dodd’s exploits were reported in his hometown newspaper. At right, Dodd and fellow corpsmen Vermoine Klauss and Carl Zaar, pose after receiving their decorations for Iwo Jima.

“Doc” Dodd stayed on duty with 1/24 through the summer of 1945. As a decorated combat veteran, he was eligible for a trip back to the states, and arrived back in San Francisco on 1 September 1945 – the day before the Japanese surrender. After a thirty-day furlough, his first in nearly two years, Dodd reported back for duty long enough to muster out. He had enlisted to serve two years; he had been in uniform for nearly four.

Dodd returned to the “3-D Ranch” and resumed his life as a farmer. He married Grace “Jerry” Howard in 1951; the new couple, along with Grace’s two children, ran the ranch thereafter. In addition to the 3-D, Dodd worked with several ranching organizations, was a long-serving member of the DeSmet school board, and a mentor to younger friends and family. Following his retirement from ranching, he spent nearly twenty years traveling with his second wife, Leola Masters.

Thank you to Tim Dodd, Walter’s nephew, for additional information and corrections.

_____
NOTES:
(1) Dodd’s first citation reads:
“For heroic achievement in action against the enemy on TINIAN, MARIANAS ISLANDS, on 25 July, 1944. Pharmacist’s Mate First Class Dodd was serving with a Marine infantry battalion when all the hospital corpsmen in one of the rifle companies were either killed or wounded. He was moving forward to this company, which was heavily engaged, when he observed a jeep ambulance, the driver of which was fatally wounded. With complete disregard for his own safety, he jumped into the jeep and drove it through intense enemy fire to the aid of the most exposed casualties. Ignoring the heavy fire, he placed the wounded in the ambulance and removed them to a place of safety. His courageous action, performed at great risk to himself, was in keeping with the highest traditions of the United States Naval Service.”
(2) Dodd’s second citation:
“For heroic achievement as a Hospital Corpsman attached to the TWENTY FOURTH Marines, FOURTH Marine Division, during operations against enemy Japanese forces on Iwo Jima, Volcano Islands, from February 19 to March 16, 1945. Tireless and conscientious, Dodd voluntarily and repeatedly led stretcher parties to the aid of the wounded under intense enemy small-arms and mortar fire. When enemy fire had thwarted all previous attempts to rescue a wounded marine some yards in front of our lines on March 4, Dodd entered the enemy’s line of fire to lead a party to the casualty and successfully directed his evacuation without injury to the stretcher bearers. His courage, initiative and devotion to duty were in keeping with the highest traditions of the United States Naval Service.”