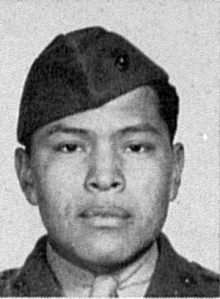 Perry Allen was born in Rattlesnake, New Mexico, in 1927. He grew up on the Navajo reservation near Shiprock, with his parents Joseph and Katherine, and sister Irene. He took off from home not long after his sixteenth birthday, and was soon on his way to San Diego to become a Marine.

As a full-blooded Navajo, Allen was picked for communication school immediately after finishing boot training. At Camp Elliott, he and other young Native Americans entered the code talker program – speaking in code, but openly in their native Navajo language over radio and telephone, they were able to send and receive sensitive information much faster than conventional coded messages. The top-secret program was such a success that the Japanese were never able to interpret a single message sent between code talkers.

With his new skills fully mastered, Private Allen received orders to report to the First Battalion, 24th Marines. However, for reasons known only to the Corps, the young Navajo was not handed a radio, but boxes of ammunition. He would fight as a crew member for one of the company’s light machine guns. (1)

Allen was promoted to Private First Class on November 11, 1944, and had his first taste of combat was on Namur, in the Marshall Islands, where his gun crew fought on February 1-2. Then it was back to Maui to re-train, and off to Saipan, where he landed on June 15.

On July 6, 1944, Allen’s machine gun squad positioned themselves to take out a group of Japanese soldiers who were hiding in a cave. Suddenly, from above, came a shower of hand grenades. Marines on a cliff behind them were lobbing the missiles at the enemy, but one threw without proper aim. The grenade bounced off a tree and exploded in the air, showering Allen’s crew with pieces of shrapnel. Allen was hit in the left hand and another gunner, PFC Claude Chamberlain, was also wounded. Both were evacuated for treatment – but a clerical error resulted in Allen’s listing as MIA, rather than WIA.

The following month, Irene Allen received a telegram notifying her that Perry was missing in action. Frantically, she packed a bag and went to San Francisco to get more information. It wasn’t until weeks after that the true story came out. The clerical error was reported up the chain of command until the misleading telegram was sent; it was not officially corrected until a puzzled Allen reported as fit for duty. He had simply spent several weeks recuperating in a Kwajalein hospital.(2)

PFC Allen went on to serve in the battle of Iwo Jima, and was training for the invasion of Japan in the spring of 1945 when he was transferred to Naval Hospital #128 for unknown reasons. When the war ended, he rejoined his company for the trip back to California, and was honorably discharged on October 25, 1945.

After the war, Perry Allen returned to Shiprock. He rose to prominence after the war despite a car accident in the late 1950s that left him confined to a wheelchair. Seven years spent as a PR representative for the Navajo (and the writing of several articles and pamphlets) led to his appointment as chief prosecutor for the Navajo Nation in 1969.

Allen took great pride in his service. In 1969, more than twenty-five years after he was wounded, he finally received his Purple Heart medal; in 1999, he and his wife Marie designed and presented a special flag to honor Navajo veterans of World War Two.

_____
NOTES:
(1) Why Allen was not assigned as a battalion code talker is unknown, though he may have simply been unable to code fast enough to qualify. The battalion’s regular code talkers were PFCs Keith M. Little and Peter P. Sandoval, who joined in December as PFCs after much more intensive training at the Camp Pendleton signal school. Several post-war articles do mention that Allen was “originally slated to become a codetalker following his enlistment and schooling.”
(2) Reported in the Navajo Times, September 25, 1969.

One thought on “Perry Allen”