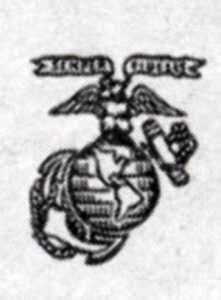 James Osborne Miller was born in Dade City, Florida on June 8, 1926. His family (parents James William and Mary “Alpha” Miller, plus older sister Mary) moved to California and by 1930 had settled in Oakland.

Miller volunteered for the Marine Corps shortly before his eighteenth birthday, entering the service on April 6, 1944. He trained at MCRD San Diego and at Camp Pendleton before joining the 24th Replacement Draft and sailing for the Hawaiian Islands. Miller’s unit was attached to the 4th Marine Division on Maui; while they participated in some additional combat training – Miller himself specialized on machine guns – they were not given the intensive preparations that the veterans received. This experience would be sorely needed early in 1945, on the island of Iwo Jima.

Private Miller was assigned to Company C, First Battalion, 24th Marines at the end of February 1945. He replaced a fallen machine gunner in the decimated company, and within days of joining his new platoon was in the thick of combat in Iwo’s dreaded Meat Grinder. Miller survived a week of chaos before being severely wounded on March 8; a flying piece of metal smashed into his left leg, tearing it off.

By March 11, Private Miller was at the US Field Hospital #111 on Guam. His journey home would lead him back to Hawaii, and then to Mare Island, California. Miller would remain in hospitals for more than a year, receiving both the Purple Heart medal and a promotion to Private First Class before his discharge in the late summer of 1946.

In civilian life, James Miller was active in the Disabled American Veterans and the VFW of Eureka, California. He worked as a watchmaker for Lee’s Jewelry in Eureka. Unfortunately, he passed away on April 13, 1968, at the young age of 41.