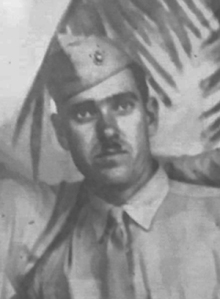 Burness Colon Jordan entered the world in Randolph, North Carolina, on March 3, 1918. He was the fourth of seven children born to Allen “AJ” Jordan and his wife, Sarah Stokes; an older sister, Evelyne, died before Burness was born. The family had a farm in Randolph, and as the children reached working age they either pitched in as farm hands or found jobs in one of the county’s many hosiery mills. Burness followed this later path, joining the industry sometime in the 1930s. The work was good enough for Burness to strike out on his own; in 1939, he married Frances Pauline Allred at a ceremony in Danville, Virginia. The two made their home in Asheboro, and Burness went to work for Slane Hosiery in nearby High Point. Their first child, Harold, was born in May of 1940.

The first rumblings of war reached the Jordan home that October: Burness was required to register for the draft. He dutifully reported to the local registrar, who took note of his physical description (height, five feet ten inches; weight, 138; brown eyes and black hair and ruddy complexion) and marked him on the list of Local Board #4. The card was filed away; at the time, Burness may have thought he’d never see it again. 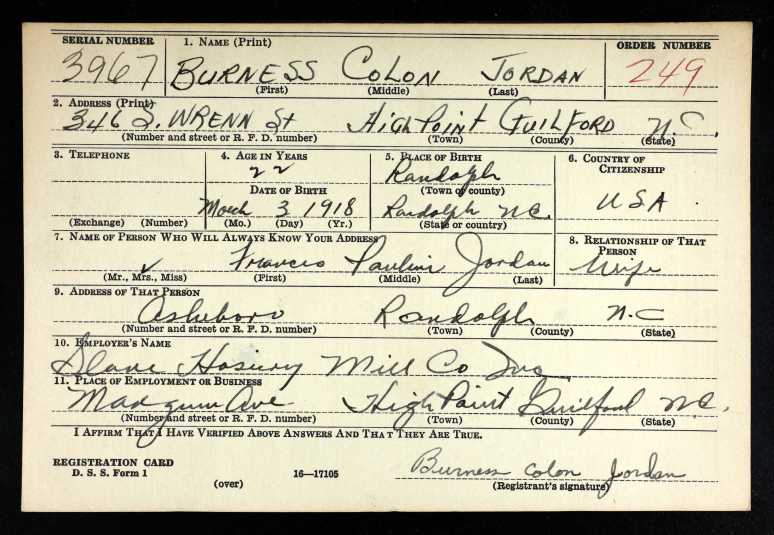 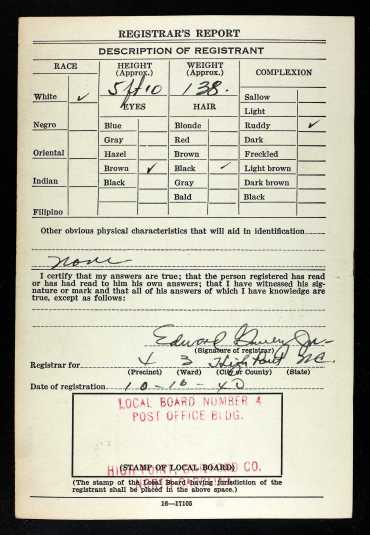 In April of 1944, however, his draft number came up. Burness was sworn into the service of the United States, and within a few days was on his way to Parris Island. There he joined the 9th Recruit Battalion; when he emerged at the other end of boot camp, he was Private Jordan, United State Marine Corps Reserve.

The Pacific campaigns of 1944 chewed up young men by the thousands, and the divisions grappling with the Japanese in the Marianas Islands sorely needed replacements. Private Jordan was one of those chosen to join the Fleet Marine Force, and by July was on his way to Hawaii with the Fifth Replacement Draft. He spent a brief period of time with a service battalion before receiving his assignment to a combat unit: First Battalion, 24th Marines.

Jordan joined the veteran outfit on September 18, 1944. He was one of nearly forty replacements assigned to Charlie Company, a hard-fighting outfit that had lost more than half of its men in the Marianas campaigns. Within a month, he was promoted to Private First Class and was beginning to find friends among the men in his company. PFC Harris Peterson was the first to sign Jordan’s souvenir scrapbook, and Pvt. Richard J. Miller joined him for a souvenir photo taken on liberty.

Jordan didn’t just find new friends in Hawaii – so many men were in the service, it hardly seems surprising that he located a few acquaintances from home as well. Privates Edgar Lineberry and William Dula, once fellow hosiery mill workers from Asheboro and now members of the 30th Replacement Draft, were attached to Jordan’s Fourth Marine Division. When the four Marines gathered for their picture, they had no idea what lay in store in the next few months.

Long after the war, Burness Jordan would tell his family a few stories about Iwo Jima.

There was the time he was pinned in a trench, with a persistent Japanese solider “trying to dig him out with gunfire.” Shots came closer and closer, until they were striking a rock beside him. He could hear every bullet crack off the rock, and waited uneasily for one to get through. Fortunately, none did. After waiting a long while, he slipped his helmet off his head, shuffled it down to his feet, and carefully raised it into the air. He hoped the Japanese would hit the helmet and, thinking him dead, shift their fire somewhere else. The Japanese were too clever for this ruse, however, and Jordan had to grit his teeth and wait until his tormentor gave up or was killed.

There was the time a young kid approached him with a question. (At 26, Jordan was older than most of his company.) The young Marine asked if Jordan believed in praying. The words were barely out of his mouth when a shot rang out and the young Marine dropped to the ground.

There was the time he tried to grab a moment of quiet, to take a quick drink of water or a bite to eat, only to have his provisions shot from his hand.

And there was the time he was in the shell hole with a few other men, and the mortar shell came in fast, and he saw that one of his friends was split in half before everything went black.[1] Jordan woke up in a hospital with a bandaged leg. He later remembered that everything he saw had an odd yellowish tinge.

Three weeks later, he was out of the hospital and able to amble about. On April 12, 1945, PFC Jordan returned to Charlie Company, or what remained of Charlie Company. His unit had lost so many men killed and wounded that it had been disbanded near the end of Iwo Jima; most of the faces he saw were replacements, just like he had been the previous September. After his return, he learned to perform a regulation haircut, and when a vacancy opened in Baker Company, he became their barber. Frances sent him some barber supplies; in return, he mailed her his bayonet – stained, according to family legend, with dried blood.

He continued to make friends, took pictures of them, had them sign his scrapbook. “Glad to be with you after bloody Battle,” wrote one. “When better barbers are Begat, Bernie will Be Begot!” quipped another. He might have taken the chance to visit with Lineberry, now permanently assigned to his regiment’s Third Battalion; they might have looked at their group photo and said a prayer for Miller and Dula, who lost their lives on Iwo Jima. 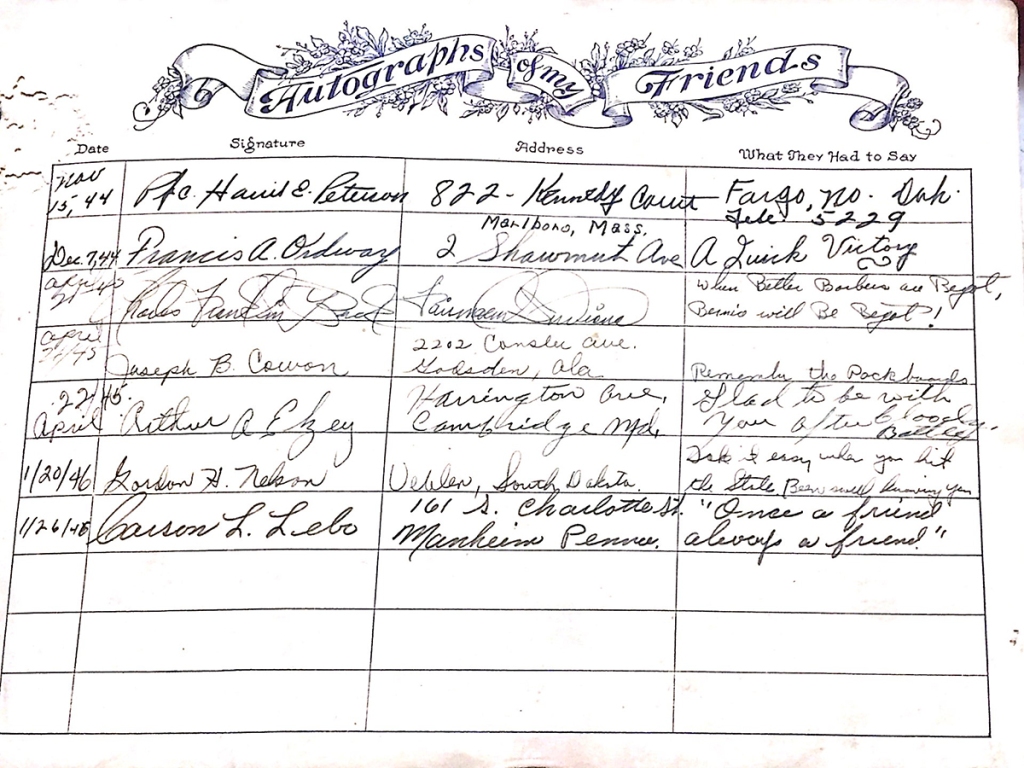 When the war ended, PFC Jordan found he still had some time to serve. He spent the last months of his enlistment with the 9th MP Battalion, chasing ship-jumping sailors and AWOL Marines around the Hawaiian Islands. Finally, on March 9 1946, Burness Jordan was released from the Marine Corps. He had just turned twenty-eight years old. 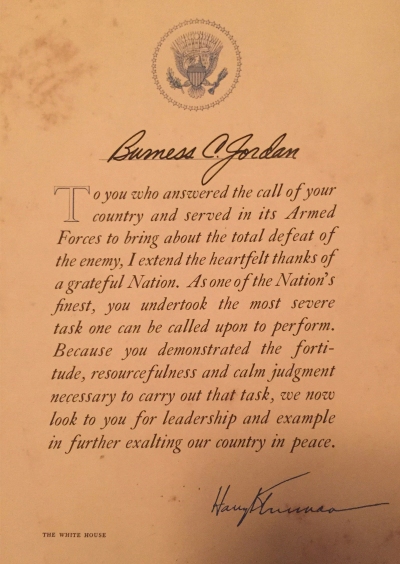 In civilian life, Burness worked for the Service Distributing Company, Randolph Bonding Company (as president and treasurer), and, appropriately, for the Jordan Oil Company. His marriage to Frances stayed strong, and in 1959 they added a pair of twins, Darrell and Carol, to the family.

Burness Jordan died of a heart attack in 1979, at the age of 61. He is buried in Oaklawn Cemetery in his hometown of Asheboro.

Special thanks to Darrell Jordan for all images and biographical information on this page.

____
NOTES:
* Photograph: The original image is printed backwards – a common developer’s error found with souvenir shots from this time. Correcting the print for this website flipped Burness’ handwritten captions.
[1] Jordan suffered shrapnel wounds in his leg. Battalion muster rolls record that he was wounded and evacuated on March 3, 1945 – his 27th birthday.