The Fourth Marine Division continued to sweep inexorably forward, with 1/24 trailing in its wake. The battalion could hear the continuing fight for Hill 600 and sympathized with the unlucky 23rd Marines, but were quite content to let someone else fight over the rugged hills and ridges. More interesting was the progress of the other two battalions of the 24th Marines, who were moving quickly along the level terrain by the coast against only scattered resistance as they rounded the shore of Magicienne Bay and entered the small villages of the Kagman Peninsula.

Few live Japanese were seen, but their presence was everywhere. An abandoned roadblock outside the town of Laulau held up tank support for nearly four hours. Munitions were stored in the town itself, and at 1145 a blockhouse exploded, causing 15 casualties in Second Battalion.[1] A flame-throwing tank fell victim to a mine.

Marine enthusiasm for Army support was beginning to wane. The 27th Division had the thankless assignment of attacking up the center of the island between the two Marine divisions. If resistance on the peninsula was minor, it was due in part to the fact that most Japanese had taken to the hills, where they stymied every Army attack. The 27th’s failure to advance in pace with the Marines meant that the flanking Marine regiments had to stretch their lines thinner and thinner to maintain contact. From the heights of Mount Tapotchau, the tallest mountain on the island, Japanese defenders could spot and shoot at the flanks and even rears of Marine units. The Marine commander, General Holland Smith, was so incensed that he summarily fired the Army commander, Major General Ralph Smith.[2]

The direct impact of this stretching meant that 1/24 was called out of reserve status to fill in between 2/24 and 3/24. “Our companies are moving out and will probably be used in center of Regt’l front,” noted the War Diary at 1330; twelve minutes later, “B Co. has been committed.”[3] By 1600, all three of 1/24’s companies were back on the front line.[4] “As the attack continued northward we turned again to the east, fanning out on the cultivated level ground leading to the cliffs at the tip of Kagman Point,” noted Fred Stott. “Few of the enemy had remained on such indefensible ground, and, preceded by numerous tanks and a heavy carpet of artillery and rocket fire, our movement was swift.”[5]

Nightfall found the battalion digging in along the O-5A line on Kagman Peninsula. Altogether, the regiment had gained nearly 1,200 yards, and 1/24 lost only two men wounded, possibly when friendly artillery fell short around 1710.[6] Scattered rifle shots were heard from 2/24’s position as Japanese troops wandered into American lines, but for most of First Battalion, the night was the quietest they had yet spent on Saipan.

This section of an operations map shows the line of departure (LD) and nighttime positions of the 23rd and 24th Marines. Also evident is the widening gap between the 23rd’s left flank and the Army’s 165th Infantry. 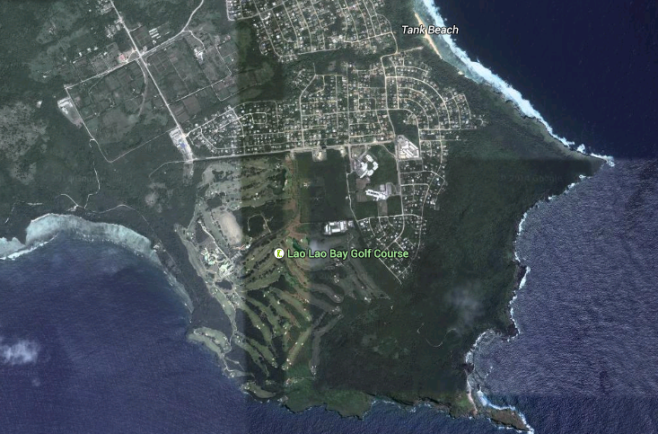 Kagman Peninsula today. The flat, tilled land was ideal for settlement, and much of the 24th Marines’ zone of operations is now a golf course.

[1] 2/24 had been the victims of a similar event on Namur in February of 1944, when a blockhouse full of torpedo warheads went up in a tremendous blast.
[2] The “Smith vs. Smith” controversy that blew up in the wake of this decision has been well documented elsewhere, and is still debated by military historians. Ralph Smith was replaced with Major General Sanderford Jarman.
[3] Battalion War Diary.
[4] Report of RCT 24, in Operations Report, 4th Marine Division, Saipan, Annex I (San Diego: Headquarters, Fourth Marine Division, 3 October 1944), 20.
[5] Frederic A. Stott, “Saipan Under Fire” (Andover: Frederic Stott, 1945), 8.
[6] Battalion War Diary.