July 3 began with a disaster at the battalion CP.

Short rounds were endemic on Saipan. The 14th Marines, the artillery regiment of the 4th Marine Division, was as talented a group of gunners as any in the Corps – but even they made mistakes, and their mistakes could cost lives.[1] The same went for the regiment’s 81mm mortar teams, who were dutifully responding to a fire support order when one of their seven-pound projectiles landed squarely on the CP.[2] The single round wounded Captain George Webster (intelligence officer), Sergeant Major William Dolly, Corporal Willie Turner Jr. (driver) and PFC Jack Stein (messenger). 1Lt. Gene Mundy was slightly wounded but remained on the line; the other four Marines were evacuated.[3] 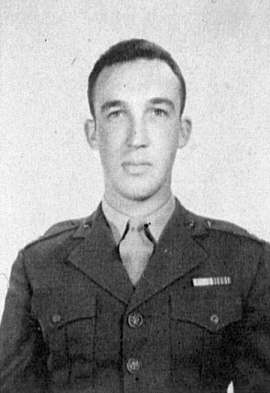 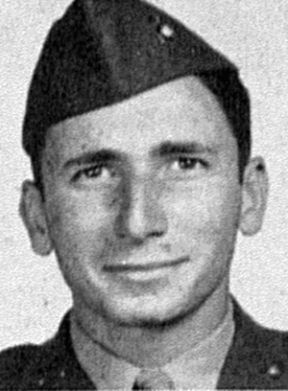 Daylight brought relief for foxhole buddies Bob Tierney and Herb Mauritz. Bothered all night by the sound of crying and forbidden to investigate in the darkness, the two Marines set out at first light to find the source of the noise. “We found a small girl about 5 or 6 years old,” Tierney reported. “She was booby-trapped and if we would have tried to get her in the dark, chances are that she, along with us, would have been blown up.”[4] Most Marines did their best to help the civilian population of Saipan—it was the first time the Corps fought on a Pacific island with such a significant number of noncombatants. “A number of times we did take civilian prisoners, took them behind the lines and we had stockades set up there for their protection,” noted Corporal Bob Williams. “First thing we did was feed them and make sure they were able to rest. Never saw a Japanese soldier surrendering.”[5] After the accidental slaughter of civilians described by PFC John Pope, 1/24 Marines took every precaution but were still leery of anything moving after dark. Williams described another incident involving civilians caught in a crossfire:

We stopped in this one area, and the next thing you know, maybe 10-15 feet away, one of our fellows is hollering “Halt! Who goes there?” Somebody answers, “Me Maline, me Maline.” The Japanese had trouble saying the letter R. Couldn’t say Marine, it comes out as “Maline.” I could hear this one fellow from our company cussing like mad, shouting “You are not!” and a couple guys start shooting. It was two people trying to get through the lines. One was a Japanese soldier [in uniform], dead as a doornail. The other didn’t have a scratch and was undressed from the waist up, so somebody rolled him over. It was a civilian lady, and MAN was she a lady.[6]

The Fourth Marine Division was now in the rugged, hilly terrain of central Saipan. “Usually, to front line troops, one hill was like any other hill, even though one might be tall, another squatty, another wooded, another bare,” wrote historian Carl Hoffman. “It was only when a hill presented something distinctly unique in the way of appearance or—especially—enemy resistance that its name became familiar to all. Lying within the zone of the 4th Marine Division were four hills which became all too familiar…. Two of these were named for their heights in feet: 721 and 767; a third, nothing more than a nose protruding from the southeastern face of Hill 721, was appropriately designated ‘4th of July Hill;’ the fourth, Radar Hill, was so named because of Japanese radar installations there.[7] While every Marine in the division was not compelled to scale each of these, it is safe to say that everyone got into the act.”[8] The O-7 line was on the other side of these hills; lacking the space to go around the strong points, the Marines and their attached Army battalions had no choice but to go through them.

All three companies of 1/24 were lined up for the assault, scheduled to begin at 1100 hours. An hour prior to jump-off, a patrol from Company A scouted as far as the south slope of Radar Hill, hustling back just as friendly artillery landed squarely on the front line. This was hardly an auspicious start for the day’s attack, but within forty minutes Baker Company had moved 500 yards to a commanding ridgeline, sending back a captured map showing Japanese defensive positions. Again, friendly artillery fell too close and a terse message from Captain Cokin requested “artillery on radar be secured.”[9]

Errant artillery was the greatest danger of the advance—the lack of Japanese resistance was notable. The advance moved so quickly over the rough ground that maintaining contact became an issue. Company C was tied in with the Army on the right; a gap grew between them and Company A (battalion center), and Company B (battalion right) had “no contact with any unit on flanks” when it slowed up 800 yards ahead.[10] Sergeant Samuel Porter McNeal, the guide for Charlie Company’s Third Platoon, volunteered to make the connection with Company A. His men discovered a fortified hill concealing a Japanese machine gun; McNeal quickly organized an attack and despite being wounded managed to take out the enemy position and secure the connection between companies. For his gallantry, Sergeant McNeal received the Silver Star.

Company A discovered a weather and radio tower guarded by a Japanese field piece and a handful of communications troops belonging to the 55th Naval Guard Force. PFC Bob Tierney, the demolitions expert from Wisconsin, described the action:

A Marine by the name of  Jim Stokes and I came to a radio station. Jim was a demolition man and had a pack of compound C-2, one-pound blocks of TNT and grenades. We looked in the building and could not see anyone, but we could hear activity in the basement. Jim yelled the [Japanese] word for “surrender,” but got no response. He prepared a demolition package. The C-2 and TNT came in packages about the size of one-pound butter cartons. He took two of the C-2 blocks and one TNT, which made the shape of an L. He then added a hand grenade to make a square pack and wrapped it with electrician’s tape. I shot out the basement window and Jim threw the “package” through the opening in the window. The only problem was that there was a 7 second delay fuse on the grenade. A Japanese soldier caught it and threw it back; Jim caught it and threw it back [again]. All of this occurred in 7 seconds. It exploded in the basement and all was quiet. We then went inside and collected some souvenirs and papers to turn over to Intelligence Officers.[11]

One of the defenders was an Imperial Japanese Navy radio operator named Wada Shozo. A graduate of training in Yokosuka (home of the elite 1st Yokosuka Special Naval Landing Forces) Wada was sent to Saipan so quickly that he had no time to inform friends and family of his departure, and censorship restrictions prevented him from divulging his location. He kept a stack of  letters and postcards from home, and in his spare moments penned a few of his own to send once the Americans were defeated. Among his prized possessions were photographs of his family, which he kept pristine through the long losing battle. 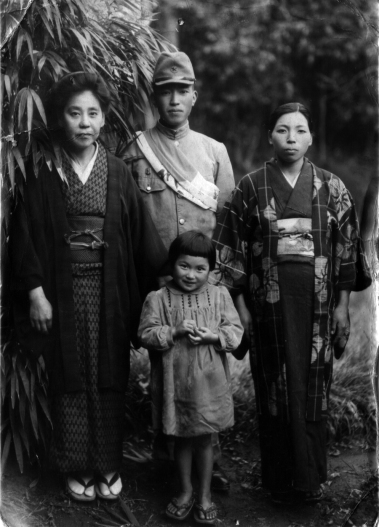 This may be Wada Shozo, the naval communications man whose letters Benard appropriated.

The soldier’s mother and little sister.

Wada Shozo never saw his family again. On July 3, 1944, he became one of the “Jap soldiers who of their own free will chose to die.”[12] His letters, postcards, and photographs were carefully collected by a seventeen-year-old Marine PFC named Bernard Elissagaray. Elissagaray carried his treasured souvenirs through the rest of the battle, a series of hospitals, and eventually home to California, adding them to his meticulous scrapbook collection. 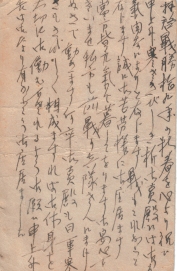 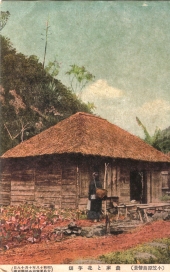 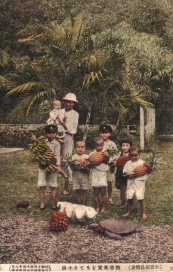 A letter and several postcards belonging to Wada Shozo, taken by Bernard Elissagaray on Saipan. Collection of the author.

The remainder of the day was essentially a turkey shoot. 1/24 flushed a disorganized unit of several hundred Japanese, and between 1323 and 1532 called in a succession of air strikes, chasing the enemy from one target square to the next in a display succinctly noted as “very effective.” Company B even managed to secure seven prisoners—quite a haul for the regimental intelligence team, who had precious few enemy soldiers to interrogate—and at one point encountered “large numbers of Japs pocketed in a ravine bed and practically defenseless,” as Lieutenant Stott recalled. “Air strikes, artillery, mortars, and small arms were employed with success and satisfaction. It is highly satisfying to pour out destructive fires with effect and without retaliation.”[13]

By 1630, the 24th Marines were comfortably atop Radar Hill, and 1/24 was rewarded with a night in regimental reserve. It had been a busy and successful day, although many in the battalion had newfound and very pointed opinions about artillery.

Even the toughest Marines were beginning to feel the strain of combat. Tierney could feel his strength ebbing with every step north; corpsmen worried he had contracted dengue fever. When he struggled to keep up, Herb Mauritz simply said. “Give me your gear.” The husky Mauritz carried Tierney’s 45-pound load of BAR, ammunition, and 782 gear in addition to his own.[14] Tierney was not alone; Captain Horace Parks was also feeling the effects of the “break-bone fever,” and the ailment was starting to affect his leadership of Company C. “Bus” Parks had earned the respect and admiration of his Marines—nearly seventy years later, “Iron Mike” Mervosh would still cry out “God bless him!” when recalling the captain’s leadership on Saipan—but as his temperature climbed, Parks began to seriously question his ability to continue.

[1] The exact number of casualties caused by friendly artillery is not known. In Company A alone, Captain Irving Schechter, Cpl. Alva Perry, and PFC Bob Tierney report being shelled by friendly artillery at differing times; isolated short rounds could occur at any time.
[2] It is implied, but not stated, that the culprits were 1/24’s mortar section.
[3] In an apparently unrelated turn of events, Mundy was promoted to Captain in the field on this date. His is the only known instance of an officer from 1/24 receiving a promotion during battle.
[4] Robert E. Tierney, “My Marine Corps Experience.”
[5] Robert L. Williams, “In My Own Words,” interview conducted by Veteran Voices of Pittsburgh, March 12, 2014.
[6] Ibid. Williams does not specify if the “civilian lady” survived her encounter.
[7] Radar Hill was named by the Marines; on maps, it appears as “Hill 221.”
[8] Carl W. Hoffman, Saipan: The Beginning of the End (Washington: Historical Division, US Marine Corps, 1950), 203.
[9] Battalion War Diary.
[10] Ibid.
[11] Tierney. In his recollection, Tierney places this account as happening on July 7, 1944. However, James Stokes is listed as being wounded and evacuated on July 3, 1944, and there is no indication of 1/24 being near such a Japanese installation after this date.
[12] Bernard C. Elissagaray papers, collection of the author.
[13] Frederic A. Stott, “Saipan Under Fire” (Andover: Frederic Stott, 1945), 12.
[14] Tierney.