The [replacement] plan used in the IWO JIMA campaign was an emergency measure and not satisfactory. A disorganized unit cannot fight with much efficiency, and the new men have not absorbed the spirit of the outfit they join. Many of the replacements hardly knew who their platoon leader or squad leader was before being killed or wounded. The replacements were not adequately trained for the type of fighting experienced on IWO JIMA, nor were they trained in the use of all infantry weapons.[1]

It was not the first time First Battalion received a large number of new men. They rebuilt their ranks at Camp Maui after suffering casualties on Namur. In the Marianas, new men intended for the 2nd Marine Division filled in the gaps, some arriving in the aftermath of Saipan, and others mid-battle on Tinian, to slug through the final days of the campaign. And in September 1944, scores of Marines from the mainland arrived to be melded into the unit. Four months of training and one week on Iwo made these new men “old salts,” and it would be their responsibility to teach the replacements enough to stay alive.

Sources vary on the exact date the replacements arrived. Battalion muster rolls indicate about half reported for duty on 24 February, while the other half joined on 28 February. This first date is unlikely, as 1/24 was engaged in heavy combat on February 24 and 25, and the replacements suffered no losses on this date. The battalion’s AAR states that the replacements arrived en masse on 27 February, which seems more plausible for a unit in reserve.[2] It is also not clear when the front-line platoons and squads actually absorbed the new men. Baker Company appears to have had a policy of using at least some of its replacements as stretcher-bearers before putting them on the firing line. This would help the new men acclimate to battlefield conditions. Replacements could also be sent wherever needed, which may explain why some combat veterans recall seeing new faces daily. Corporal Alva Perry believed that “we were getting replacements every day now as we were losing men every day.” [3]

No matter when they arrived, each new man was taken up on the battalion’s muster rolls by D+9. Administrators tried to tailor each man’s assignment to his MOS, but with so many “basic” Marines and anti-tank crewmen (1/24 had no anti-tank weapons save the bazooka) this was not always possible. Private Wayne D. Thomas (521) was sent to Company A for a crash course in the mortarman’s craft.[4] Private Joseph Ziemba was directed to the assault platoon for instruction in flamethrower. Private Robert Owensby would live the credo “every Marine a rifleman,” while his buddy James Parker became a machine gun ammo carrier. Both went to Charlie Company with Sergeant Philip R. Baldwin.[5]

Private James A. Moore “was sent forward to a dugout where there was a man with a typewriter and a file system. He asked for my name, rank, and serial number. Then, he handed me a “V” mail blank and told me to write home. ‘Remember, this might be your last letter ever to go out,’ he said.” [6] Moore was assigned to duty as a stretcher-bearer in Baker Company. Private Lawrence A. “Slats” Trower also wound up in Baker; the welcome he received from his new squad leader, Corporal Andrew Chorzempa, was brief but memorable: “If you know how to pray, start praying now.” [7] Trower became an assistant BARman, Privates Melvin Adalman, Rondall Baird, and Lloyd Abbott were similarly assigned.

While the battalion as a whole was glad of the replacements, the individual receptions they received ran the gamut from vague friendliness to calculated indifference to veiled hostility. Corporal Robert D. Price of Able Company summed up the practical side: “They were so badly needed to help fill in the ranks and help carry a weapon, we didn’t have time [for socializing].” [8] Camaraderie extended to learning each other’s names, and sometimes men didn’t even get that far. One of Al Perry’s replacements was a tall, lanky seventeen-year-old who introduced himself as “Bones” – he never knew the kid’s real name.[9] PFC Stanley Cupps was assigned a replacement called Taylor. A lieutenant performed the brisk introduction: “Taylor, this is Cupps. Do what he tells you.” Taylor didn’t listen. “Taylor was peeking over the top, and I told him to get his head down. He said, ‘They can’t see me,’” recalled Cupps. No sooner had he spoken the words than a Japanese marksman drilled Taylor through the skull. “He lasted about half a minute. His name was Taylor. That’s all I know about him.” [10]

If the replacements needed any more reason to listen to veteran advice, they had only to look a few hundred yards to the rear.

Marines armed with bulldozers and shovels began a major construction project on 21 February. A site between Motoyama Airfield #1 and Yellow Beach Two was selected; the grade was steeper and the soil looser than they preferred, but space was at a premium, and they had little choice. They toiled for three days, ducking sniper fire and gingerly disarming booby traps and dud rounds. Eleven of them were wounded as they worked.[11] On the morning of D+5, a bulldozer dropped its blade and carved out the first of several forty-two-inch deep trenches. Men with shovels scooped holes in the trench floor: one foot deep, three feet apart. Into each was placed the body of a dead Marine. It took time to build decent roads the cemeteries, so stretcher-bearers hand-carried each man in a seemingly unending stream. By the time the cemetery opened, several hundred Marines were already awaiting burial.[12] 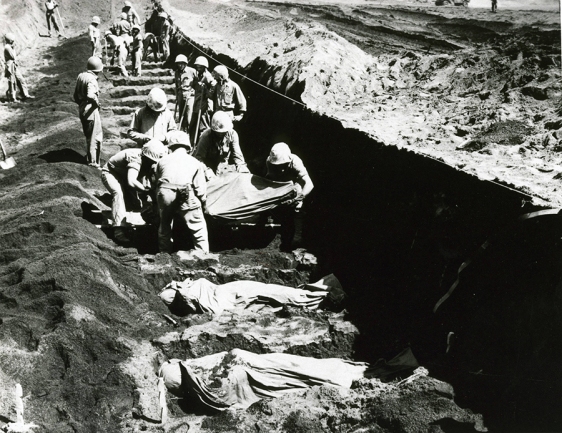 On 26 February, 2Lt. Stephen H. Opalenik, the former wrestler turned Mustang mortar leader, was buried in Row 4, Grave 173 of the 4th Marine Division Cemetery. A few minutes later, Corporal John M. Corcoran, the affable Able Company BARman hit by a friendly shell, was placed in a grave – then PFC Roland P. Jackson, the former high school football coach with a wife and young son at home. As 1/24 enjoyed its three-day respite in the rear, Graves Registration men buried sixteen members of the battalion. Many more awaited burial and still others were yet to die.

By this point in the campaign, the lines had consolidated from east to west across the island with the Fourth Division on the east, the Fifth on the west, and two regiments of the Third Division filling in the center. Both airfields were in Marine hands, and the southern one was supporting a few observation planes. Mt. Suibachi, too, had been secured for several days, and all our strength was concentrated on the one remaining sector. Nonetheless, the progress while we were in reserve was just as painfully slow as it had been when we were on the line.[13]

Every morning, the thunder of the pre-assault barrage wakened those who managed to sleep through the night. As the last rumble of artillery died away, there might be a brief period of comparative quiet before a sudden eruption of small arms fire signaled the meeting of American and Japanese infantry. Shortly after that, stretcher teams would appear with their bloody burdens. The majority of the sound and fury seemed to be coming from a low, craggy hill and a long, bowl-shaped ridge. At the time, 1/24 didn’t care to know the names of local landmarks – to them, “it was just hill after hill after hill” – but they would become intimately familiar with the boulders and crevices of this one small part of Iwo Jima in the days to come.[14]

“Such a state of relaxation couldn’t be prolonged indefinitely,” opined Captain Frederic Stott, “nor was it desired. We realized we would have to return to the line, and further delay would bring no new benefits.” The battalion was bedding down on D+9 when the anticipated orders arrived – they were to relieve a decimated unit of the 23rd Marines on the front line before dawn and be ready to continue the attack. “In a way, we welcomed the orders,” said Stott, and while he doubtless spoke for some of the First Battalion, many more faced a long and sleepless night, wondering what the morning would bring.[15]

[1] Major Charles L. Banks, “Final Report on IWO JIMA Operation, Battalion Landing Team 1/24,” in Annex George to Fourth Marine Division Report on Iwo Jima: RCT 24 Report (20 April, 1945), 139. Hereafter “Final Report.”
[2] Ibid., 140.
[3] Alva Perry, “The Men Of ‘A’ Company,” 2011.
[4] Interestingly, photographs of Thomas in his dress uniform reveal that he was an expert rifleman.
[5] Baldwin’s and Parker’s assignments are proof that MOS numbers were not ignored; Baldwin was an 812 (Heavy Weapons NCO) and Parker was a 605 (Heavy Machine Gunner)
[6] James Moore” in Bruce M. Petty, Saipan: Oral Histories of the Pacific War (McFarland & Company: Jefferson, NC, 2002), 109-110.
[7] Lawrence A. Trower, “Lawrence ‘Slats’ Trower, PFC,” in The Muted Trumpet’s Call: Stories of the Everyday Heroes of World War II ed. Chuck Knox (Chicago: Authorhouse, 2011), 140.
[8] Robert D. Price, oral history interview conducted by Thomas Swope, Robert D. Price Collection(AFC/2001/001/49660), Veterans History Project, American Folklife Center, Library of Congress.
[9] Perry.
[10] David Harper, “Month in Hell Lingers in Memory,” Tulsa World, 19 February, 1995. Accessed 15 February 2015. “Taylor” is unknown; the two battle replacements named Taylor were assigned to Charlie Company. Taylor may have been one of the otherwise unrecorded replacements referenced above.
[11] Headquarters, Fourth Marine Division, “Annex II: Medical Report,” in Annex Dog to Fourth Marine Division Report on Iwo Jima: Logistics (2o April, 1945), 313.
[12] And this was just the Fourth Marine Division cemetery. The Third and Fifth had their own, similarly built and backlogged. Some Marines waited weeks for burial – Eugene Morris and James Freeman, both killed on 25 February, were not interred until 12 March.
[13] Frederic A. Stott, “Ten Days on Iwo Jima,” Leatherneck Vol. 28, No. 5 (May, 1945); 18.
[14] “People are saying the Quarry, the Amphitheater, this and that – I didn’t have any idea where we were, you know? Nobody was saying ‘this is the Quarry,’ there was no road map.” William T. Quinn, interview conducted by the Patriots Point Naval & Maritime Museum, “Heroes of Iwo Jima: 70 Years Later,” 5 March 2015.
[15] Stott, “Ten Days,” 18.