Dan Girdano was a replacement gunner who joined the company in the fall of 1944. He fought in the battle of Iwo Jima, where he was wounded three times yet refused to leave the line for treatment – an act that would later cost him a well-deserved Purple Heart. Dan’s pictures show members of Company A in the spring and summer of 1945, as they  recovered from Iwo and prepared for the invasion of Japan.

All images on this page are courtesy of Daniel Girdano, and were provided by his daughter Danielle. 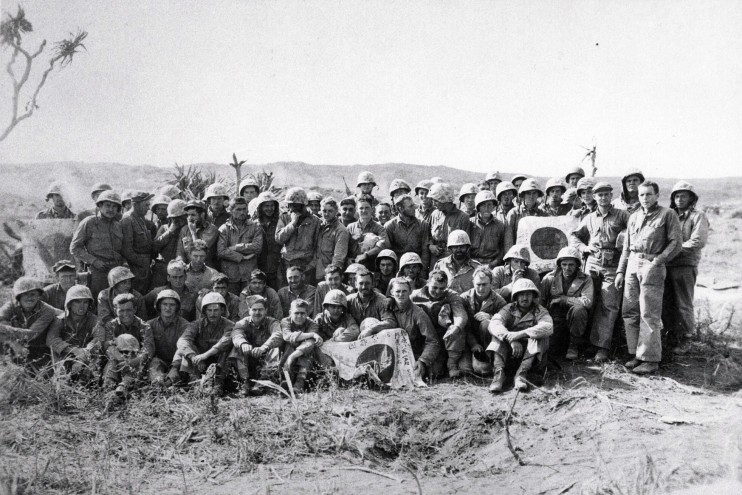 Able Company after the battle of Iwo Jima. Notice that a good number of the Marines in this shot are not paying attention to the cameraman. 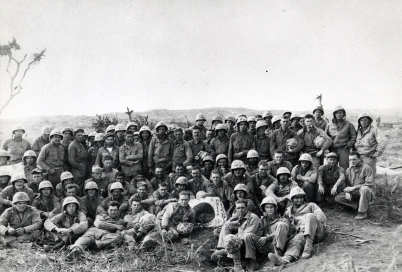 Another shot of the same group, from a slightly different angle and apparently after a call to knock off the shenanigans. 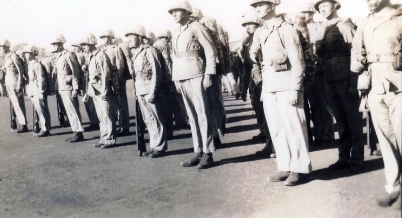 Back at Camp Maui, a platoon of Company A stands at attention, either for drill or getting the Word from an officer.

Squad pictures were among the most popular souvenirs, even though the faces changed radically after every campaign.

A machine gun squad at Camp Maui. Corporal Doster is at right in the front row. 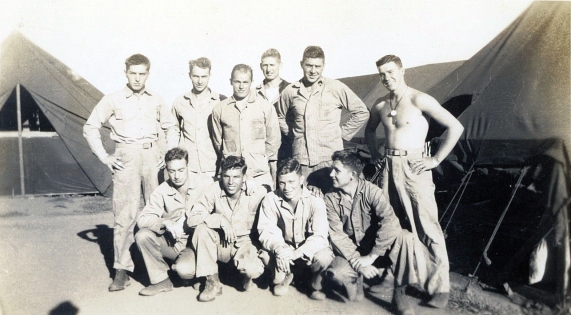 Two of the company’s old-timers. MG squad leader Dominick Piccolomini, at right, has been overseas since the invasion of Namur. He wears the Purple Heart ribbon that he earned on Saipan. The other Marine is unknown, but a veteran of several campaigns as evidenced by the number of stars on his Asia-Pacific campaign ribbon. 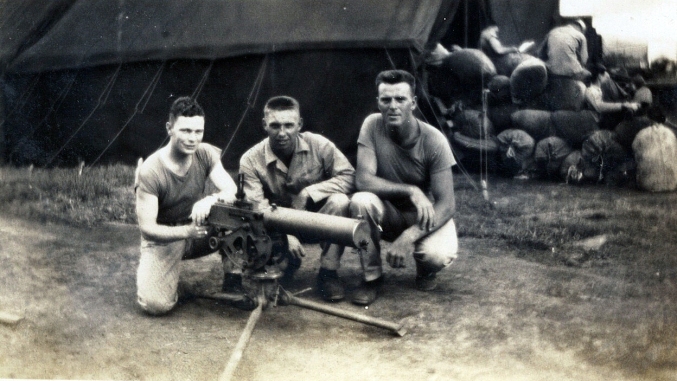 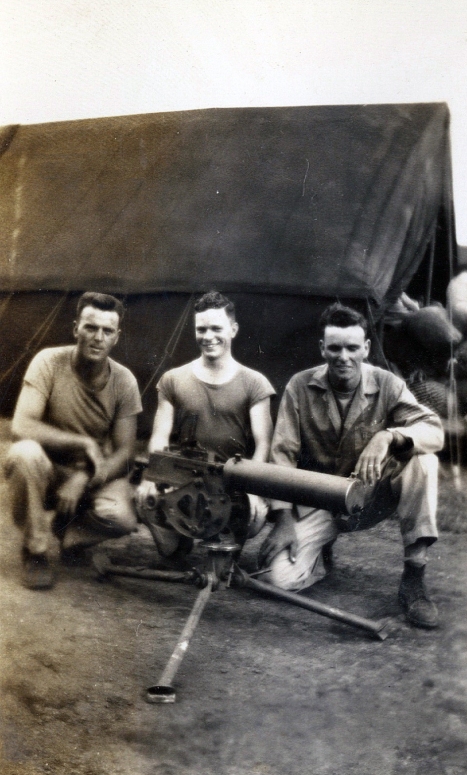 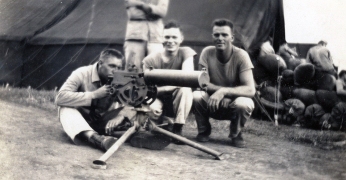 Walter “Butch” Campbell, “GI,” and “Pop” Johnson with the MG.

Occasionally, there was time to goof around. “Pop” Johnson winds up to smack Daniel Girdano’s keister. Tom Jones stands ready with a pistol in case Girdano makes a break for it.

Buddies GI and “Butch” Campbell strolling down the company street. All Marines had at least one close buddy with whom they did nearly everything from liberty call to manning a foxhole.

Another Marine, possibly Tom Johnson, in the company street.

Walter Campbell of the machine gun platoon holds his canteen cup at the entrance to his tent.

The inhabitants of Tent 41 rigged up a screen door to make their lodgings more comfortable. Some wit has posted a “Sleeping In” sign to the door behind this rather sleepy looking Marine. 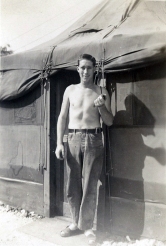 Another Marine outside Tent 41 brandishes his favorite pipe. 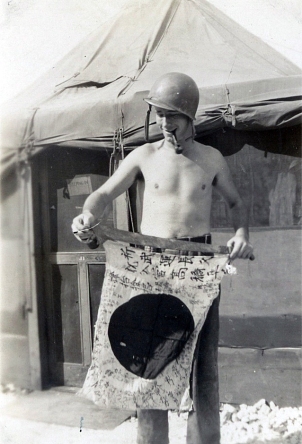 To the victors of Iwo Jima went the spoils. Nearly everyone picked up battle flags – the more writing, the better – and this Marine has also brought back a wicked looking machete. 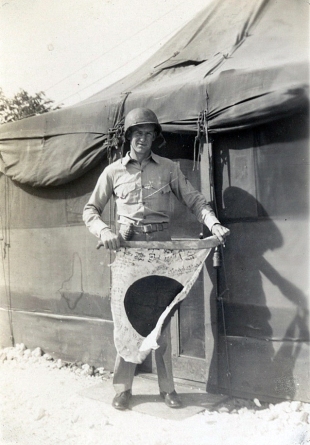 And if you didn’t have any souvenirs, you could always pose with a friend’s collection. 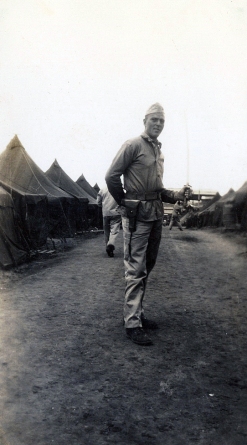 And if you were lucky, you might bring back a real Samurai saber.

Unknown Marine in the company street. 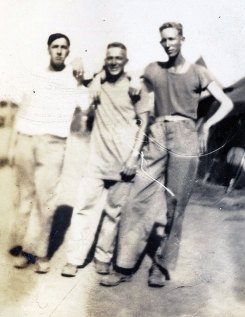 Three unidentified Marines at Camp Maui. The tall one on the right may be James Pritchett, a former member of Company D who had been with the machine guns since the regiment was formed in 1942.

The Marine on liberty had a few options for travel. He could take a bus in town…

…which sometimes led to frustration…

…in which case, one could always hitchhike.

Photographers near any Marine base did a brisk business. Dan Girdano (at far left) poses with three friends. 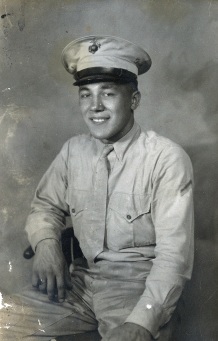 Dan Girdano and a friend in the photo studio.

The identities of many of these Able Company marines have been lost. Please contact the webmaster if you have any information about the men pictured here. 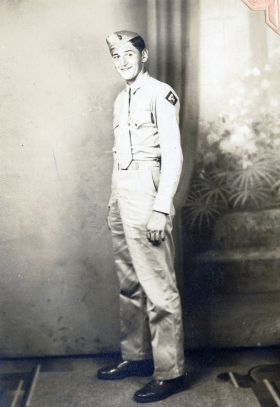 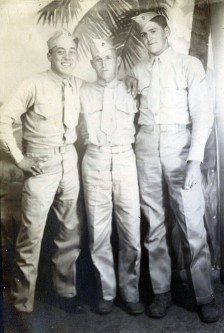 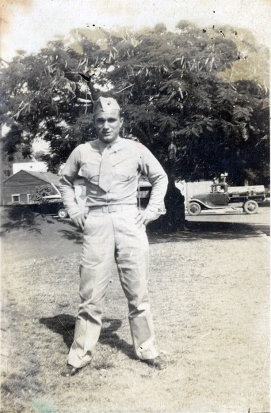 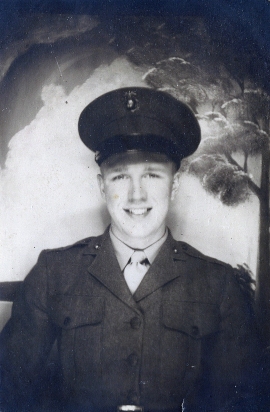 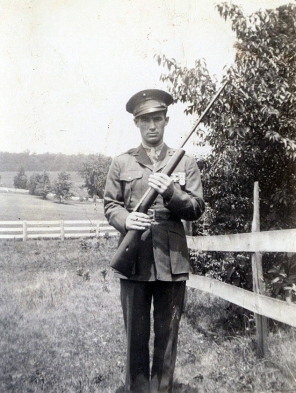 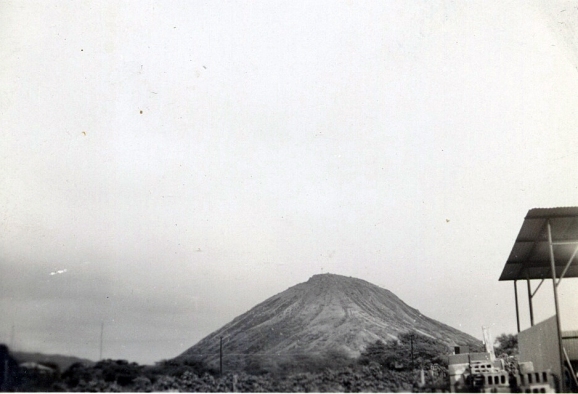 Mountain vistas were never far away.

Nor was the beach.

At some point in 1945, a gang of Marines from Able Company and some supply personnel pooled together and had a combination beach party and cookout.

The assembled revelers in front of an abandoned trailer – with a mascot in a white cap at center in the front row.

Four unidentified Marines relaxing in the trailer near the cookout site. The lieutenant at right wears a Fleet Marine Force Pacific Supply patch instead of a divisional emblem.

This officer may have been a former comrade who was transferred out of the unit, or a visiting friend. No other obvious officers appear in the cookout pictures, so he may have arranged the deal – or at least procured the supplies. 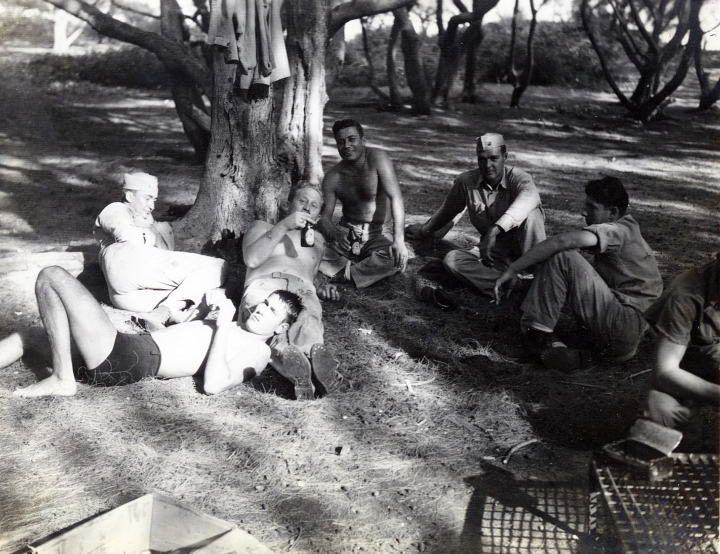 After a beer or two, the lieutenant dispenses with all ceremony and is “crapped out” on the deck with the rest of the men waiting for lunch.

Everyone gathers around the grill.

When steaks and fried potatoes were on the menu, kitchen duty didn’t seem all that bad.

Buddies sitting on the hood of a truck. 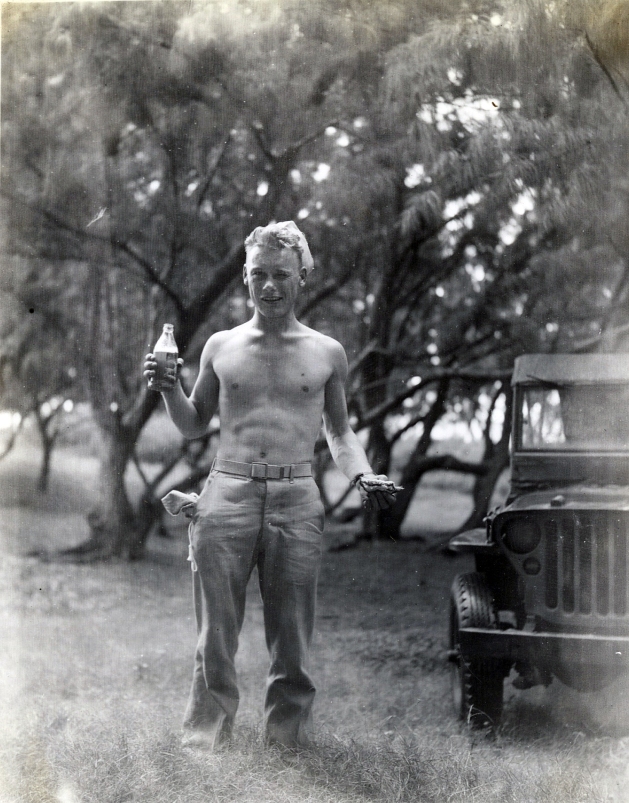 A beer and a sandwich are all this happy Marine needs on a sunny afternoon with no required duty. 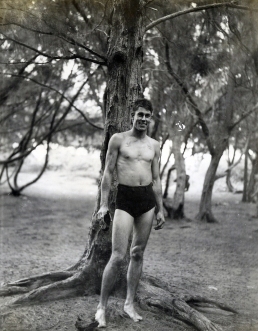 Ready for a swim. This fellow sports two bluebird tattoos on his chest – he may have been a corpsman, as the bluebirds were a Navy tradition, although some Marines adopted them as well. He has another elaborate design on his right upper arm. 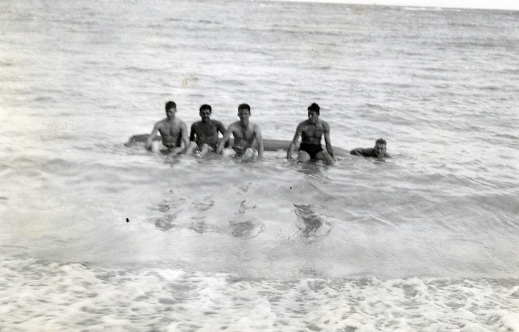 Cooling off in the ocean.

An unidentified Warrant Officer relaxes just as much as his rank allows – but no further. He has forsaken a beer for a bottle of cola.