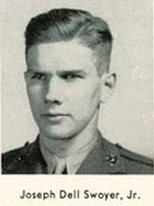 Joseph Dell Swoyer was the very picture of a Marine officer – tall, athletic, likable and eminently capable. During his service with First Battalion, 24th Marines, he rose in rank from second lieutenant to captain, in position from platoon leader to company commander, and fought in four campaigns – for which he was awarded two Bronze Stars and two Purple Hearts.

These letters are provided courtesy of Andy Swoyer.

Of course I am not permitted to discuss training and the like but I think I can safely say we’ll be spending the next month or so in the field.[2] The word now is that this stay will be continuous but I doubt that it will – I’m almost sure we’ll get back occasionally. If not I’ll probably be able to smuggle a V-Mail in with someone; on occasions trucks will be sent back for various necessities.  But I think the general idea is to see how we can last without re-supply, so expect the next letter when you get it.  We are forced to write V-mail and you are requested to use only airmail – or did I say that before? I will get your mail continually so write even thought I don’t reciprocate.

I took the BB team to the local gym and played a local team.[3] We murdered them and nevertheless they were surprisingly good – our size was the main feature in their defeat.  As I was saying, you’d be surprised how well these natives play the game – they are fast and can totally handle the ball.  The pivot plays they didn’t savvy.  By the way I still am unable to put the darn thing in the hoop.  I made lots of “terrible shots Joe.”

Tonight we start another tremendous hike. This one even surpasses our 26 miles we did at Camp Pendleton with full packs and heavy machine guns.[4] This time it’s only 19 miles but all up hill and with the same heavy packs. Walking at night is a good idea. It’s cooler and the darkness permits you to get your mind in a semiconscious state–thus time flies.  I’m all squared away and ready to go.

Have another half hour before we move so I’ll try another sheet.

Just received yours of 31 Aug. acknowledging mine of 25 Aug.  Mom claims she doesn’t know how to write me – I’ve probably said it before in other words but write as usual – I’m interested in what you guys are doing + the activities of those I know.  I think no different + am no different than the Joe you usta know.  One more thing – don’t think the case is the opposite because I talk so much about it – I talk a lot because you do.  If you want to know about me call Lt. Joe Stevens, St. Alban’s Hospital on Long Island, NY.  He left us with an apparently slight arm wound, D+21 or thereabouts.[6]  So help me God what I say is true – it’s tough, sure, but not as bad as you think – not as bad as I thought it would be.  I can take what I’ve gotten + lots more. If you want to worry about me, hope I don’t get shot. My mental attitude + nervous system is just right for this sort of thing (perhaps too much so).

You guys are the ones who have it tough, you worry 24 hours a day from D-1 until 10 days after it’s over – I worry from 0 minutes to perhaps a couple of hours a day and that worry is mostly anticipation + care for your men – when it happens worry + fear leave you.  Let’s have no more of this, “Keep looking ahead “ + “Don’t let it get you down” stuff. I don’t mean to be sarcastic or rebuke you, I just want that you should see things as they are.  Some people crack up + some of those permanently – but not this guy! See? This subject is considered closed.

Phil Wood was the friend I spoke of – home New York City – excuse the sloppiness I’m trying to write too fast.[7] Needless to say I am delighted to get this letter. You’re walking on air + as a result I am too.  Pop says he was sneaking a pack a day – I was smoking 2 a day – more when completely idle or playing cards. Anyway Pop I am proud of you. Very small unexciting but enjoyable liberty yesterday – Highlight –learning that I now weigh 175 lbs. That’s again off ten + back to my old basketball weight.  Played softball today + find my physical condition poor. Hit one for three bases + just about made it to third.  Any other time it would have been a home run.

Right now I’m feeling wonderful.  Hay fever has at last gone (had it since my return) – your letter – picking up physically. Everything’s swell.  Remember I liked it here before, well I like even more now + twice as much liberty too.  No card games so I won’t make the money I did last time.[8]

Attendance at Mass has increased considerably. The campaign brought to a head quite a few conversions to the faith too; from the enlisted ranks of course. Will write to [the] Loughrey [family] tomorrow he was a wonderful guy.[9] You know if I were home the first thing I’d do is visit Mrs. Loughrey – Mrs. Newbury (Cpl) Fall River, Mass, + Mrs. Wood.[10]

I just got a letter from Cpl. Bernie Novak – who was my runner (messenger) up until the end of Tinian.[11] He is a wonderful little kid – the best Catholic ever. The most energetic – most dogged – sincere + kindest guy you ever met. He got hurt on Iwo and is in Oregon now – many of us gave him up for good but he’s well + expects to enter Junior College in September.[12] He was educated at that school on Staten Island where Bill O’Brien (St. Joe’s) once worked. I can’t remember the name of the place.

At any rate, the kid’s home is New York – I asked him to stop in on you if he gets a chance.

On Saipan we hit a tough spot – we attacked a stretch of woods on a beach going towards a western beach when a hail of fire came from same, killing a large number of guys to say nothing of wounded – after a while sweating it out we got up to go again – to mop up in the woods. Three times I went into these woods + three times no one followed me but Novak – I was afraid to take my eyes off the enemy + yet I had to get the guys to come too.[13]

The third time I turned to curse my men, a Jap jumped out of a hole, whipped back his arm to throw a grenade, but Novak shot him through the heart – the grenade went off in his hand. All of Saipan + Tinian he watched over me like that. I always led the attack + had many occasions to turn my back, but Novak was always watching like a bodyguard.

The above incident rewarded him for his perseverance. We recommended him for a Bronze Star but he never got it. One day we were attacking but against no or unknown resistance – as it turned out there was none but I was sick + every time we halted I fell asleep – he watched over me all day. When we finally quit for the day – I learned he too was sick + he turned in the next day + was gone from me for two days.[14] Now “see who he is.” So now if he comes you’ll know who he is, although I think I may have told you this before.

That’s all for now I think I’ll go on liberty + play tennis if I can find a partner.

Love to All,
Joe

…I forgot to tell you about my picture in the “Leatherneck”.  It is over Stott’s article.[15] I am the joker dishing out the turkey. My face is obscured but I remember the incident (it was pineapple and turkey) and I remember others in the picture.  Besides that’s the way I always dressed – wool undershirt + wool khaki shirt.  At the time we are about 50 to 100 yds. behind the front lines but really safe; not too close to the front to catch the big stuff + far enough back to have no fear from holed-up Japs.

I’m sorry I’ve nothing to report other than the above – no mail today + not much of interest.  So I’ll knock off + call it a day, even though the dust made it dark enough to be called night – I wish it would rain.

Regards to all.
Love, Joe

[1] This letter was written from Camp Maui, Territory of Hawaii.
[2] The Fourth Marine Division was completing field exercises ahead of the invasion of Saipan; within two weeks Swoyer and his battalion would be aboard ship headed for combat.
[3] Swoyer loved basketball–his height made him a natural for the La Salle University team (he played from 1939 – 1942) and he kept up with the sport overseas. The team’s physician, Lt. (j.g.) Richards P. Lyon, would refer to him as “a wild man on the court.”
[4] At the end of the infamous Pendleton hike, Swoyer entertained bets as to whether or not he could run to the top of a nearby mountain and back before the trucks arrived to carry the exhausted battalion back to camp. He won.
[5] Written from Camp Maui after returning from the Marianas campaign. Swoyer has been back at the rest camp for about two weeks.
[6] 1Lt. Joseph Stevens led the machine gun platoon of Company A. He suffered his wound on 8 July 1944 (D+23); despite Swoyer’s assessment of “apparently slight” it was enough to keep Stevens out of combat for the rest of the war.
[7] 1Lt. Philip E. Wood, Jr. was the mortar section leader of Company A, and a close friend of Swoyer’s. He was killed in action on 5 July 1944.
[8] Referring to an officers’ nightly poker game that ran at Camp Maui during the spring of 1944. Several of the regular players (including Phil Wood) were killed in the Marianas campaign.
[9] 2Lt. John J. Loughrey, a platoon leader in Company C, was killed in action on 29 July 1944, during the battle of Tinian. Loughrey and Swoyer might have been acquainted before the war; both were from the Philadelphia area and attended Catholic schools (La Salle College High School and La Salle University).
[10] The mothers of deceased friends. Corporal Robert E. Newbury was one of Swoyer’s NCOs, killed in action 8 July 1944.
[11] Bernard Blaise Novak (1924 – 2008).
[12] Novak was shot through the eye on February 20, 1945.
[13] Referring to the final attack to the coast on Saipan, 8 July 1944.
[14] The date of this event is not known.
[15] “Ten Days on Iwo Jima” by Captain Frederic A. Stott appeared in the May, 1945 Leatherneck magazine.