Time to blow some of the dust off the “post” button on this website (we’ve been wearing out the “new page” function lately, more on which below) for a really quite exciting update: there is, or at least STRONGLY appears to be, some footage of 1/24 on Iwo Jima.

Color footage. Of the landing and initial advance inland. With what looks like a platoon from Company A front and center.

I check the dashboard on the site every now and again to see where new visitors are coming from. Usually it’s search engines or Facebook links, but every now and again some post from this site will wind up on a forum somewhere, and the link drives traffic back over here. This is how I found out about the footage, and I’m glad I followed up because otherwise I would never have located it.

An eagle-eyed marine aficionado went through the extensive Critical Past archives searching for footage of the Fourth Marine Division on Iwo. They did a pretty compelling job of arguing for the identities of several men in the footage (I won’t steal their thunder too much: check out the original post for some solid scholarship). One of the UNIS marks they picked out was on the helmet of a marine in a landing craft. It’s the distinctive 412 of Company A, which was already enough to grab my full attention. But the poster pointed out that the man’s name was visible on the helmet as well–and after a check of the muster rolls, concluded that it was likely Corporal Leonard “Lenny” Yush of A/1/24.

I must say I’m inclined to agree. Check out the footage and see for yourself. (Corporal Yush turns to give the camera a worried look at the 1:01 mark.)

(Corporal Yush was wounded in action five days after this footage was taken, earning his second Purple Heart.)

As is becoming tradition, there’ll be a Taps post for each of these gentlemen at the end of the year. For now, here’s a great portrait of Jim Jackson, as provided by relative Blake Jackson. 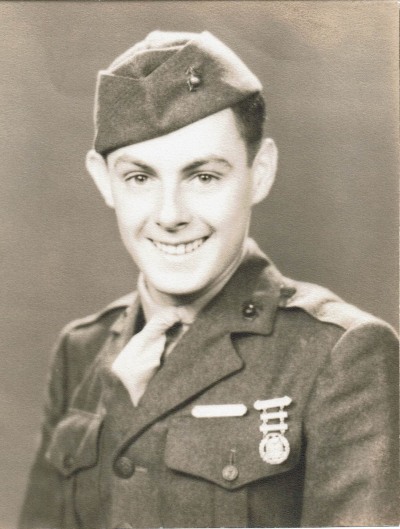 Still to come: a letter of mysterious provenance, but believed to be written by 1Lt. William Masterson, the Bn-4 for Second Battalion, 25th Marines. The author gives a vivid depiction of life with the Fourth Marine Division on Saipan and Tinian–and settles a few false assumptions that a supply officer’s role was always safe in the rear. UPDATE: Read the letter here.

One thought on “Going In, Passing Away, Adding On.”